The iO Series 7 is the brush to go for based on features and price alone if I base this comparison on the recommended selling price of $199.99.

The Series 9 is the top of the line model and will be more widely sold and promoted. However, it commands a $100 premium.

For that extra $100 the benefits are a couple of extra brush heads in the box, a travel case that allows you to charge the toothbrush whilst inside and 2 extra cleaning modes.

This therefore is not a justifiable premium in my mind over the Series 7.

But, the reality is that it is very likely that the iO Series 9 will actually sell for much less than its retail price and I suspect will actually sell on average around $220-240, thus making it a potentially justifiable premium for the extras it offers. 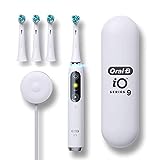 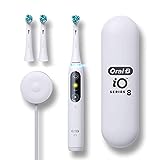 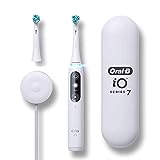 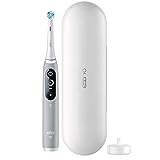 The following table lists the key differences between each series only.

If a feature is not listed, then it should be assumed that all 4 series have the feature. For example, all 4 have an OLED display and a built-in timer and pressure sensor.

The number of differences between the Oral-B iO 6, 7, 8 and 9 Series is not as significant as you might expect.

Technically there are more similarities than there are differences. Here is a list of ways in which all 4 series of the iO are the same. All of the models have:

Not available on the Series 6 is the:

Instead, it has a standard Oral-B charger that takes up to 12 hours to recharge the brush.

It is primarily the box contents, number of cleaning modes and price that differs.

The top of the line Series 9 comes with 7 cleaning modes, whilst the 8 comes with 6 and the Series 6 and 7 comes with 5.

The modes and which model has what are listed in the following table.

Just because the Series 7 does not have a tongue clean mode that would last for 20 seconds on the Series 9, does not mean you can’t brush the tongue with the Series 7. You would just need to use a different mode.

The lack of additional modes does not ultimately have any bearing on the cleaning results.

To learn more about the differences, do read our Oral-B cleaning modes explained article.

All 3 of the variants have an interactive OLED display, however where the 8 and 9 series have a color display, with the series 6 and 7 it is black and white.

Where the iO Series 9 stands out over the other models is the inclusion of the 3D tracking.

All have the AI to work out the position of the toothbrush in the mouth, but only the Series 9 tracks 16 different zones. The other models track just 6.

You get a more detailed visual representation of the 16 zones in the app when using the iO9. Essentially, the top of the line model makes it easier to visualize where you are doing things right and wrong.

The number of brush heads included in the box with each model differs.

All models use the iO Ultimate Clean brush heads.

The 7, 8 and 9 models come in both a black onyx and white alabaster color option.

With the Series 8 and 9, there is the choice of a third color.

That choice is violet ametrine in the Series 8 and rose quartz with the Series 9.

The Series 6 comes in black lave and opal gray.

The difference here is the color of the toothbrush handle only.

With the black onyx models, the handle, heads, charging stand, travel case and power adapter are all black in color.

With the white alabaster the handle, heads, charging stand, travel case and power adapter are all white in color.

When it comes to the rose quartz and violet ametrine variants, the handles are either color, but all the accessories are white.

However, the 9 Series has an extra feature not available on the 6, 7 and 8.

Called ‘power2go’ the travel case with the 9 Series allows the iO to be recharged whilst sat inside.

The toothbrush is charged via a detachable power adapter.

The brush cannot recharge without the power adapter being connected.

The power adapter is proprietary to Oral-B products. It does not use the more desirable USB Type-C charging.

These differences are because of the perceived value Oral-B places on the additional box contents and features each model offers.

No, simply put they all clean as well as each other.

Yes, the 8 and 9 Series does have extra modes compared to the 7, but these modes don’t necessarily alter the actual cleaning results.

Instead, the modes alter a users experience and comfort with the toothbrush.

There are arguments to suggest a toothbrush that suits a users needs or wants better can result in a better clean of the teeth. But, the evidence for this, particularly clinical data is basically non existant.

For many years Oral-B and other brands have offered multiple cleaning modes on electric toothbrushes and I have yet to say any meaningful data to suggest these extra modes pay dividends for the majority of users.

If your brushing technique is bad. There is a strong argument to suggest that the iO9 and its tracking of 16 zones can encourage you to brush all your teeth better than the 6 zones that are tracked with the iO6, 7 and 8.

The 16 tracked zones are as follows:

Whereas the 6 zones tracked with the other models are:

The Series 9 app screen is configured in such a way that you can clearly see which of the 16 zones you have and have not brushed.

16 dotted zones sit in the center of the on-screen display in a circular formation. As each zone is brushed correctly, that dotted zone disappears until no dotted zones remain and all the teeth on the large visualization turn white.

When only 6 zones are tracked, you can essentially spend all the time cleaning only 1 of the surfaces within that zone and the brush will still consider the zone brushed. That isn’t the case with the premium iO9.

Of course, with any toothbrush, iO series or not, you want to be giving fair attention to all of the 16 zones so you have an even clean to the teeth and gums.

6 zone tracking relies on you making sure you cover all the surfaces.

Thus, to master your technique the Series 9 does have that bit extra to push you to make sure you are making the correct contact with all surfaces.

But, how much difference this really makes in everyday use, is a bit subjective.

Yes, the 8 and 9 do offer a fraction more in the box as well as extra cleaning modes, but the ‘extras’ don’t really add up to the real world price difference.

The logical and most sensible purchase of these, therefore, is the Series 6, based on price alone.

But, let’s take a reality check.

The selling price of the 9 Series is likely to be more heavily discounted, in the region of 20-25% and as such it will likely sell for $220-240 making the additional brush heads and power2go charging travel case worth the extra spend.

The differences between each model in the iO Series are relatively subtle.

As you will have seen it easily becomes confusing as to know which variant is best to buy.

All of these brushes offer more than what you need.

You do not need to spend as much as this or find a toothbrush with as many features as the iO Series to clean your teeth well.

The Oral-B Smart 1500 does a decent job for a fraction of the price!

That said, the iO marks a major design change in the Oral-B line up of products and is considerably quieter.

On paper alone, the iO Series 6 is the most sensible purchase based on what you get for the price. With a $150 premium price for the 9 Series, it is not the sensible choice for the limited differences.

However, the reality is that the actual selling price, not the recommended, will be such that the Series 9 will be the logical buy because the price premium over the 6 Series will be justifiable.

Do you own or have you used the Oral-B iO Series?