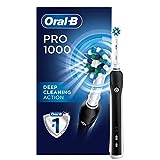 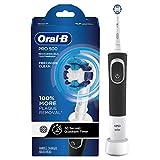 Detailed comparison: what’s the difference between the Pro 1000 and 500?

Compared to some models in the Oral-B range there are not that many differences between these models, but those that do exist are fairly important.

The Pro 500 is really more of a budget/entry-level brush whereas the Pro 1000 sits a level above and is a more desirable brush to use on a daily basis for a number of reasons.

It is the cleaning action that is the most significant difference between these 2 models.

These pulsations give a small back and forth movement to the bristles on the head and really help give a deeper clean.  It is the more desirable Oral-B models that have this 3D cleaning action.

In addition to the type of movement, the number of movements the heads make differ slightly too.

By no means a deal breaker with these brushes is the way that they look.

They have a slightly different design to the handle, the Pro 1000 looking the more sleek, in my opinion.

The Pro 500 has a more tapered design to the handle, thicker at the top, working to a slightly thinner base.

Compare this to the more uniformly shaped handle of the 1000.

Both brushes have a large amount of grip on the handle.  With the 500 this is wrapped around approximately two thirds of the handle.

The Po 100 doesn’t have quite as much grip. There is a piece of rubber/silicon material that runs the length of the front of the handle, with raised plastic notches on the rear.

Both are comfortable to hold in hand, but the slimmer profile of the 1000 takes the edge for me, but there isn’t a great deal between them.

The 500 is available with a black rubber grip only. This contrasts with the white plastic body.

The Pro 1000 is available with a black rubber grip, but it can also be purchased with a white rubber grip.  The white option looks a little more clinical and stands out less against the gloss white body of the Pro 1000.

Supplied in the box with both brushes is a single brush head.

The CrossAction is now the more common head supplied with brushes, but the differences between them are not that that significant, so don’t worry too much.

Should you have a preference you can purchase that style and fit it to either handle.

Another feature on the 1000 is a pressure sensor.

Brushing too hard is one of the biggest causes of gum recession.  The bristles of a brush need only skim the surface of the teeth.  Think sweep rather than scrub. More scrubbing pressure does not equal a better clean.

The addition of the sensor looks to help prevent this.

It is implemented a little differently to most other Oral-B models, however.

It is not a visible pressure sensor.  This means no red light on the handle that lights up to tell you it has been activated.

Instead, if you brush the teeth with too much force, the sound of the brush changes slightly as will the cleaning action.  The motor slows down and the pulsations are stopped.  It can be quite difficult to notice this change, particularly for new users.

Although a visible sensor is better for most, the key here is that the brush will take the steps to try and prevent doing any unnecessary damage.

The final differences are around the battery in these brushes.

Both have a built-in rechargeable battery which uses Nickel Methal Hydride (NiMH) technology.

It is possible that on a full charge you may get a couple more days from either, but more often than not it is the Pro 500 that outperforms here.  Not by a long way, but a day or so.

Unfortunately, knocking the Pro 500 down again is the lack of battery charge/status icon.  There is no way of knowing the battery is low until you see the head slow and feel the brushing sensation change.  It will just stop when it is completely flat.

The 1000 will also flash when recharging via the charging stand, something the 500 doesn’t do.

The charge light goes out once the 1000 has been fully recharged, but with the 500 it is a bit of a guessing game as you don’t get any feedback at all.

Both brushes offer significantly more brush head movements per minute than a manual toothbrush, but the Pro 1000 offers what is called a 3D movement, compared to the 2D movement of the 500.

The Pro 500 brush head operates at 7,800 oscillations per minute.

Just how much difference this really makes is quite difficult to say, but you can feel the difference in the cleaning power and post brushing feel of your teeth.

With all this said, if you have not yet perfected your brushing routine; that is how long you brush for, how often you do this and the technique you use, then it is likely the greatest benefits will be gained from investing in this than any 1 toothbrush.

With either brush, the typical selling price is a fair bit lower than the suggested price.

Of course, the exact price will vary from 1 seller to another.

You are therefore looking at an average premium of $25 for the Pro 1000.

The ongoing cost of owning each brush is the same given that they use the same brush heads.

There is nothing drastically wrong with either of these toothbrushes.

The Pro 500 will serve you well if you are on a budget, but you get much more bang for your buck from the Pro 1000.

Most significant is the 3D cleaning action offered.  It is a more thorough and satisfying clean and given that this is the whole point of a toothbrush it seems the more logical option overall.