The Oral-B Pro 2 2500 is essentially identical to the Pro 2 2000 that comes out top in this comparison but includes a travel case.

For not much more extra expense, you get a toothbrush with twice the battery life, a visible pressure sensor and an additional cleaning mode.

It is one of the brushes I recommend most and for good reason. 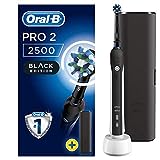 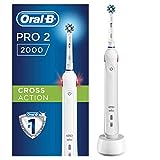 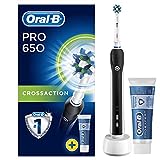 Detailed Comparison: what’s the difference between the Oral-B Pro 650 and Pro 2 2000?

I mention this because there are a few different variants of the Pro 650 and 2000.

Specifications and cleaning ability are the same on the variants, but what differs is the exact model name, the brush head supplied and the colour of the rubber grip on the handle.

Read the hands-on reviews of either toothbrush (linked above) to learn the precise differences, but just be aware, these variants exist.

Right, a detailed explanation of the differences then.

Sensitive is a mode designed to be more gentle, yet cleans effectively. It is particularly useful if you have tender or bleeding gums.

The speed of the brush head is varied and tends to be a more gentle cleaning experience.

Linked to the cleaning modes is the brush motor, sealed inside the handle. This is what generates the movement in the bristles on the brush head.

The difference is noticeable if you were to use the brushes side by side.

However, don’t get too fixated on the power difference, as although the extra power can make a difference, the Pro 650 is still offering a considerable number of movements more than a manual toothbrush for example.

A particularly useful feature that the Pro 2000 has, but the Pro 650 does not, is the visible pressure sensor.

Now, this is not essential, but it is very useful for users of any age or experience, but it is even more useful for first time electric toothbrush users.

The pressure sensor detects when too much force is being used.

Brushing with too much pressure/force, can in the long term damage the teeth and gums. You don’t need to scrub the teeth. Harder brushing does not equal better cleaning.

When it detects too much pressure, it turns a panel on the neck of the brush handle red, by switching on an LED that sits behind it.

This light is a visible sign that you need to reduce the pressure.

As the sensor is activated, the Pro 2 2000 will slow the motor, and in turn the movements in the brush head to avoid doing any unnecessary damage.

Once the pressure is reduced, the light will go out and the motor return to full operating speed.

Both brushes have built-in rechargeable batteries, but the battery technology and the subsequent battery life is different.

With twice the battery life, the Pro 2 2000 is certainly very appealing.

Both use the same style charging stand and take about the same time to recharge, but the added convenince of the 2 week battery life is a real draw in my opinion.

With the Pro 2 2000 for example, you could just about manage a 2 week holiday without needing to take the charging stand, whereas, with the 650, you would need to take that with you.

There isn’t a great deal included in the box with either of these toothbrushes, you get what you need and little more, which to be honest is fine, when you consider the price.

However, the Pro 650 does normally come with a tube of Oral-B Pro Expert or 3D White Luxe toothpaste included.

In some instances, rather than a tube of toothpaste you get a plastic travel case that holds the brush handle and up to 2 brush heads.

With the Pro 2 2000 you do not get a tube of toothpaste or travel case included.

When you look at the 2 brush handles, they actually look very similar. They are essentially identical in height, width, thickness and weight.

The Pro 2 2000 does have the visible red/orange panel on the neck of the brush handle, which is a differentiator between the two.

Another way they look different is the colour of the grip that runs down the front of the brush handle.

However, as I mentioned previously, the different variants mean different coloured grip.

Therefore you may also see the Pro 650 sold with a pink or pale blue grip, whilst the Pro 2 2000 is also available with a black and pink rubber grip.

The final difference between these brushes is the price, the 650 is generally cheaper. I explain this in more detail in a section below.

Whilst many differences exist, I think it is worth listing out the ways in which these brushes are in fact very similar.

Technically, yes, the Pro 2 2000 cleans the teeth better because of the more powerful brush motor.

The extra movements can potentially remove more plaque, bacteria and food debris from our teeth and gums.

And the Sensitive mode can help those with tender gums in a way the Pro 650 cannot.

Do not focus on this difference too much. If you cannot afford or justify the extra spend for the Pro 2, don’t worry.

Whilst technically the increased movements can make a difference, in real-world use this benefit can be quite hard to actually realise, even for a dental professional.

You can have more significant improvements on your oral health, by perfecting your brushing technique and routine, more than you would from the extra power the Pro 2 2000 delivers.

For example, if you brush twice a day, but for only 1 minute each time, you would gain more improvement in your oral health by increasing the brushing time to the recommended 2 minutes, than you would, opting for the Pro 2 over the Pro 650.

Yes, the Pro 650 is the cheaper of the 2 toothbrushes.

It is not a surprise that the more feature rich 2000 is more expensive.

You can generally get a reasonable discount on either, with the average sale price of the Pro 650 being around £23 and the Pro 2 2000 around £33.

Therefore on average, you are looking at about £10 difference in the purchase price. Of course, this is subject to change and does vary from one seller to another.

As both brushes use the same brush heads, there is the same associated ongoing cost too, which means over the life of each brush that price difference remains consistent.

£10 is still an extra amount to pay, and for some, it will not be worth the extra spend. But, spread this over the life of the toothbrush and this additional cost is less than a couple of cups of coffee!

As I have already intimated earlier in this comparison, it makes complete sense to also look at the Oral-B Pro 2 2500, which is often the same price or cheaper than the Pro 2 2000. It is essentially identical and comes with a travel case included. In many instances, you get more for less.

As mentioned above, the Pro 2 2000 is the brush I would choose out of these two.

The Pro 650 is still a very capable brush and you could do a lot worse. However, you don’t need to spend much more to get the better brush.

Ultimately, whatever brush you decide upon, it is you who needs to make the decision; but do so based on which is best for your needs or that of the end user.

Only pay the price you are happy with and do not be led into buying something if it is not right.

Hopefully, I have presented the facts and made the whole decision process that little bit easier.

If you found this useful, have any questions, thoughts or opinions, please leave them in the comments below.

Information provided on this website is not intended as dental / medical advice.

By clicking "Accept" you consent to us storing cookies on your device in order to collect non-sensitive data.

This website uses cookies so that we can provide you with the best user experience possible. Cookie information is stored in your browser and performs functions such as recognising you when you return to our website and helping our team to understand which sections of the website you find most interesting and useful.

Strictly Necessary Cookie should be enabled at all times so that we can save your preferences for cookie settings.

If you disable this cookie, we will not be able to save your preferences. This means that every time you visit this website you will need to enable or disable cookies again.

This website uses Google Analytics to collect anonymous information such as the number of visitors to the site, and the most popular pages.

Please enable Strictly Necessary Cookies first so that we can save your preferences!